skip to main | skip to sidebar

Palestinianism -
It's not just about the eradication of Israel.
It's about turning Israel into a weapon, against the Jewish people.
Melanie Phillips
פורסם על ידי אבישלום פויכטונגר ב- 14:50 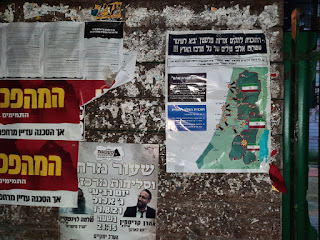 Quote of the day -- very relevant to settlement illegality rhetoric:

Quote of the day -- very relevant to Israeli diplomats' failure to respond to rampant settlement illegality rhetoric:
If Israel ha[s] a convincing defense to ... charges, why not shout it from the rooftops? [W]e cannot hope to win anyone over to our side if we do not defend ourselves forthrightly at every opportunity.
Our failure to make the case forcefully ... encapsulates much of what has been wrong with Israel's halfhearted ... "hasbara" for so many years.
EFRAIM A. COHEN, FORMER ASST. PROFESSOR OF LAW
Zichron Yaakov
https://www.jpost.com/opinion/letters-to-the-editor-april-5-2021-taylor-forcing-the-issue-664109
US diplomat for nearly 25 years
https://www.jpost.com/opinion/op-ed-contributors/diplomatic-memories

Quote of the day: "Europe [is] a continent that isn’t known for being friendly to Israel, to use an understatement." (Ron Prosor)

Quote of the day: "Europe [is] a continent that isn't known for being friendly to Israel, to use an understatement." (Ron Prosor)
https://www.jpost.com/opinion/why-we-should-follow-mathias-d%C3%B6pfners-lead-672490
פורסם על ידי אבישלום פויכטונגר ב- 18:32

How do Gaza terrorists get helium for arson balloons?

The resurgence of incendiary balloons from Gaza has highlighted the failure of the security apparatus in stopping helium from getting into Gaza.

Helium is a natural occurring gas obtained from underground, helium-rich natural gas strata. In air, helium is only 5.2 parts per million (ppm) , thus it is not economically feasible to extract helium from the atmosphere and there is no suitable technology. Large scale extraction from the earth's strata is from natural gas rich helium sources that can contain up to 7% of helium.

Latest available production statistics  show that in 2017 helium production  was led by  the USA (55%), Qatar (32%), Algeria (6%), Russia (2%), Poland (1%) and Australia3%). But in 2017 Qatar had closed two of its helium production plants producing about 20% of the world's total) operated by RasGas (70% owned by Qatar Petroleum and the rest by Exxon Mobile) because of an economic boycott due to supporting terrorism by Arab States and Saudi Arabia closed its border preventing exports. It is not known if these plants have restarted.

Helium has a variety of commercial uses. According to 2014 statistics, by far the largest is in cryogenic applications (32%), which cool superconducting magnets in MRI scanners and NMR spectroscopy. The next largest application is in production of semiconductors from silicon and germanium for use in computer chips (18%) followed by use as a shielding gas in  arc welding (13%).

MRI scanners have a liquid helium capacity in the order of 1700 liters that is equivalent to 1590 kg, whilst a 45 cm diameter balloon hold 2.83g of gaseous helium. The loss of liquid helium in an MRI scanner is dependent upon the type and manufacturer. A Phillips MRI has a loss of 1% per month, Toshiba about 4.3% per month, and a Siemens of 3 to 6% per month.  The monthly liquid top up ranges between 15.9 to 95.4 kg. In Gaza there are between 5 to 6 MRI units according to a paper published in Journal of Radiation Research and Applied Science (2018): 2 at Al-Shifa Hospital and 3 at European Gaza Hospital, with another added there in April 2018.

Compressed helium gas for inflating balloons is available off the shelf in the USA. A container capable of providing 1558 liters to fill 100 balloons 28 cm inches in diameter cost $399, whilst one for 580 balloons providing  8240 liters cost $799. Similarly Amazon UK sells a gas bottle to fill 30, 23 cm balloons for 25 GBP and USA web sites one can purchase a container providing 250 liters for $25. Arab web sites sell containers providing 7.1 liter for 320 AED in both Abu Dubai and UAE.

Helium imported from the USA as a liquid is  available in Israel. However, a search on the internet has revealed that helium is also readily available from Dubai and UAE who could make it available to Jordan. One of the Israeli TV channels showed a clip from Gaza recently of balloons being filled from what appeared to be a container providing about  250 liter helium in a disposable gas canister.

International Standards such as ISO 24431:2016 have been laid down for compressed and liquefied gas cylinders. For example for medical use ISO 32 applies for marking for identification of content. As to the external designation. colors are used to identify the contents of compressed gas cylinders. Color coded labels are attached to distinguish hazardous gases (such as flammable, toxic, or corrosive substances) (e.g., a yellow background and black letters). In the case of gaseous helium the international accepted color code for the complete external cylinder is brown.

So it is clear that any gaseous helium cylinders being used in Gaza to fill the incendiary balloons should be externally color coded brown. Besides Israel TV news showing footage from Arab media sources of the filling of balloons with helium from cylinders there are also numerous photos from international press agencies on the internet that also portray inflation of such balloons from cylinders. Close inspection reveals a startling fact that all the cylinders have this in common – not one is color coded brown. Colors range from blue to green to red. In the majority of cases it is clear from the size and color of the cylinders that they were used for cooking gas (known as LPG Liquefied Petroleum Gas) and no longer required. Consequently these cylinders must be filled from a helium source within the Gaza area.

The question that needs urgently to be answered is how the helium gas containers/cylinders reach Gaza. Effectively the Gaza/Egypt border is sealed, the Gaza coast is effectively patrolled by the Israeli Navy and Air Force, and the Gaza/Israel boundary is hermetically sealed by a well patrolled fence. Thus the only point of entry of the helium containers is through the respective crossing points at Keren Shalom and Erez -- supervised/controlled by Israel. The source could be Israeli companies, containers arriving in Ashdod and transferred to Gaza or shipments from Jordan via the Allenby Bridge crossing point.  If one can buy off the shelf balloon kits comprising of disposable helium cylinders and the like together with balloons it is possible that the kits could also be sent through the post to a foreign country or sent direct to Gaza without being subject to inspection.

Israeli crops and fields adjacent to Gaza have been burning for far too long for this farcical situation to continue. It is incompetence at the highest levels that is responsible for the failure to stop helium entering Gaza and the people of Israel have been misled. The Israel Central Bureau of Statistics maintains records of all imported and exported products -- except that shipped in to and out of Gaza via the Israeli crossing points. COGAT either does not have or is unwilling to provide information.

Is this yet another cover up?

Letter for publication, posted here by request of the author.

Why was Israel not using precision guided ground to ground missiles against Hamas in Gaza instead of hundreds or aircraft sorties? The loss of one of our planes could result in huge financial losses, an F-35 cost 100$m! Or is it that we do not have such suitable weaponry in our arsenal as the IDF/IAF did not consider them necessary. Clearly, there needs to be a public investigation into our defensive planning since we appear to be making the same mistakes as happened before the 1973 Yom Kippur War.

The deals with the UAE, Bahrain, Morocco and Sudan exemplify the Netanyahu Doctrine of peace through strength and peace in exchange for peace—as opposed to the tried and failed paradigm of unilateral Israeli territorial concessions for empty promises of peace.
His leadership and experience are required to successfully complete the immediate, critical work of ensuring that Iran does not obtain nuclear weapons, securing the Jewish state from other outside threats, defending against the scandalous antisemitic charges from the International Criminal Court and pursuing the Netanyahu Doctrine to bring peace deals with more Arab nations.
Aaron Klein is senior adviser to Prime Minister Benjamin Netanyahu.
https://www.newsweek.com/netanyahus-real-legacy-goal-making-keeping-israel-superpower-opinion-1596982

A movement therapist, a private clinic.

Can't read the Hebrew? Go to the Mattot Arim blog or Facebook page

Nir Orbach!! Please vote NO to a Meretz govt –

when  there are 65 (!)right-wing Knesset members!

To ensure you continue receiving our emails, simply reply "thanks for your email", to mattot.arim@gmail.com 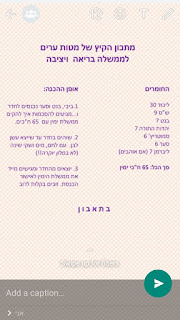 Use the above Knesset Member email addresses to prevent a pro-Palestinian state government!

Netanyahu-Saar-Bennet: 65 rightwing MK's and you're veering... left?? ALL 3 OF YOU ARE TO BLAME! Sit together – form a govt NOW!

Can't read the Hebrew? Go to the Mattot Arim blog or Facebook page

Use the above Knesset Member email addresses to prevent a pro-Palestinian state government!

Netanyahu-Saar-Bennet: 65 rightwing MK's and you're veering... left?? ALL 3 OF YOU ARE TO BLAME! Sit together – form a govt NOW!

To ensure you continue receiving our emails, simply reply "thanks for your email", to mattot.arim@gmail.com